In this three-part exercise, we’re going to build a web application using Javascript on both the client and server side, using Amazon Web Services (AWS) cloud-hosting infrastructure and the Node.JS framework.

What we’re going to do first is install Node on an Elastic Cloud Computing (EC2) virtual server instance provided by Amazon Web Services. In the following parts of this series, we’ll add a MongoDB database instance, and develop a simple server-side web application in Javascript using the Express framework and the Mongoose library for accessing our database.

Why use Javascript for a Server-side Application?

Node is the increasingly popular backend framework for building single-page web apps. On top of providing the advantage of an asynchronous (event-based) programming model on the backend, it means I can code in Javascript on both the frontend and the backend again – just like in the good old days, coding client-server applications in C.

There are limitless options for building a web application server on AWS, but lets define some basic requirements :

Your AWS account and server instances are of course managed entirely online, but there are a few applications you will need on your Mac to develop and deploy applications to AWS.

I like to use the same IDE for coding and managing projects, whatever programming language I’m using. Aptana is a pretty universal open IDE that integrates well with Git for source control and Firefox for debugging & testing.

An editor i sometimes use for coding when an IDE is overkill.

vSSH is a customizable SSH and Telnet client with macros and keys sharing. I use this app on my Mac and iPad to remotely log into my AWS instances. Get it from the Mac App Store here

Using Git to deploy my application to the server

I develop my applications locally using Aptana Studio, and use Git for version control.

I also deploy the application to the production server (my EC2 instance) using git, giving me the ability to roll back to previous versions when I break something.

The  workflow is simply:

then when I’m ready to deploy to the server, I log into the AWS instance using vSSH and clone the git repository there

thereafter, i can simply SSH into the server and use

to checkout the latest version from the repository on github, then

to start the Node server and run my application

Getting started with EC2

Let’s start by creating an account at Amazon Web Services.

When you have created your account, open the  AWS Management Console — a simple-to-use web interface for starting and managing your virtual servers.

Amazon calls its virtual servers instances. For now, you only need one instance. An EC2 instance is similar to a regular unmanaged web-server.

Here’s how we create our first instance on AWS:

2. In the menu bar you find an item labelled “Region”. Click it to switch to your nearest or  chosen region where you want to locate your server. The cost varies between locations (although it’s free for the first year).

3. After choosing a location, click the big “Launch Instance” button.

Now give your instance a name.

Type a name for your key pair file, e.g. “myhosts” and download it to your Mac.

Your key file must not be publicly viewable for SSH to work. So open a terminal window on your Mac and use this command to restrict access rights to the file :

Then choose an AMI (Amazon Machine Image) for your server. I use Amazon Linux 64 bit, which is tuned for security and performance in the cloud. I chose 64bit due to  reported compatibility issues between the 32bit version and some versions of Node.

There are other Linux AMIs that you can use, which have Node and other software pre-installed, which you may use as a short-cut later. But for our purposes, if you start with a clean installation and configure everything yourself, you’ll be able to better understand how to administer and maintain your instances in future.

Finally, hit the Launch button to start your instance.

Your instance is now launching and that may take a few minutes. Click the View your instances on the Instances page link and you will be redirected to your “My Instances” page, where you can monitor and configure all your EC2 instances:

You can now use your instance’s public dns to connect to your server via ssh. Amazon does not provide a custom username and password for ssh connections. Instead, they use the key pair file you created a couple of steps ago (a more secure method of authentication).

Connect to Amazon EC2 with vSSH

OpenPreferences, navigate to the Security tab. click + and open the .pem file you saved earlier.

Once this is added, close the preferences window.

Enter your instance’s public DNS address shown in the EC2 console in the Host Name field. in the Private Key field, select the myhosts.pem key file in the drop down box

the terminal window will appear. if asked to log in, enter ‘ec2-user’ You are now logged-in into your instance! 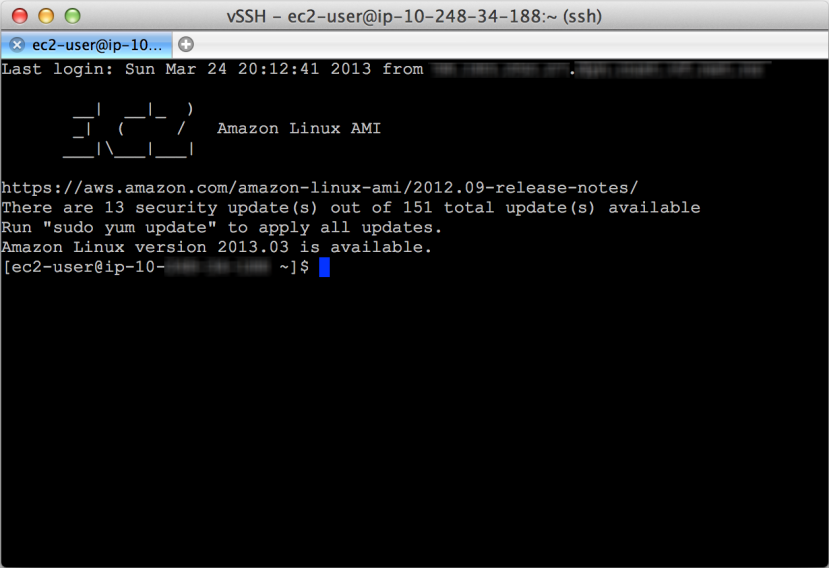 Security updates are automatically applied on the initial boot of the AMI. Upon login, the Message of the Day (/etc/motd) indicates whether or not any additional updates are available.

Type y when prompted if this is ok and wait a few minutes for the updates to install.

Install Node.js and NPM on your server

At last, it’s time to install Node.js on your Amazon Linux server! We are going to install some required packages to compile Node and get Node from its Github repo. Type the following:

Now you need to decide which version of Node you want to install. You can view all available Node tags (versions) by typing git tag -l. The make command will take a while to complete (30+ minutes), so go make a coffee and come back later.

Let’s add it to sudo’s path so that we can install more packages. You will need to edit the /etc/sudoers file.

exit insert mode, save your changes and exit VI, by hitting ESC and typing :w!

The next step is to install NPM (the Node package manager).

You now have a working Amazon EC2 instance with Node.js and NPM, and you’re ready to install any additional Node library  packages you need !

You can install additional Node packages using NPM like this :

go to security Groups on your AWS EC2 dashboard.

I hope this guide was useful. If you have any comments, suggestions or additional tips that could be added to the guide, please let me know in the comment section below.

Go on to Part 2 – Adding a Database

AWS SDK for Node.js – The SDK helps take the complexity out of coding by providing JavaScript objects for AWS services including Amazon S3, Amazon EC2, DynamoDB, and Amazon SWF. See http://aws.amazon.com/sdkfornodejs/ and the Getting Started guide here

Next, in Part 2 of the series, we’ll add a database